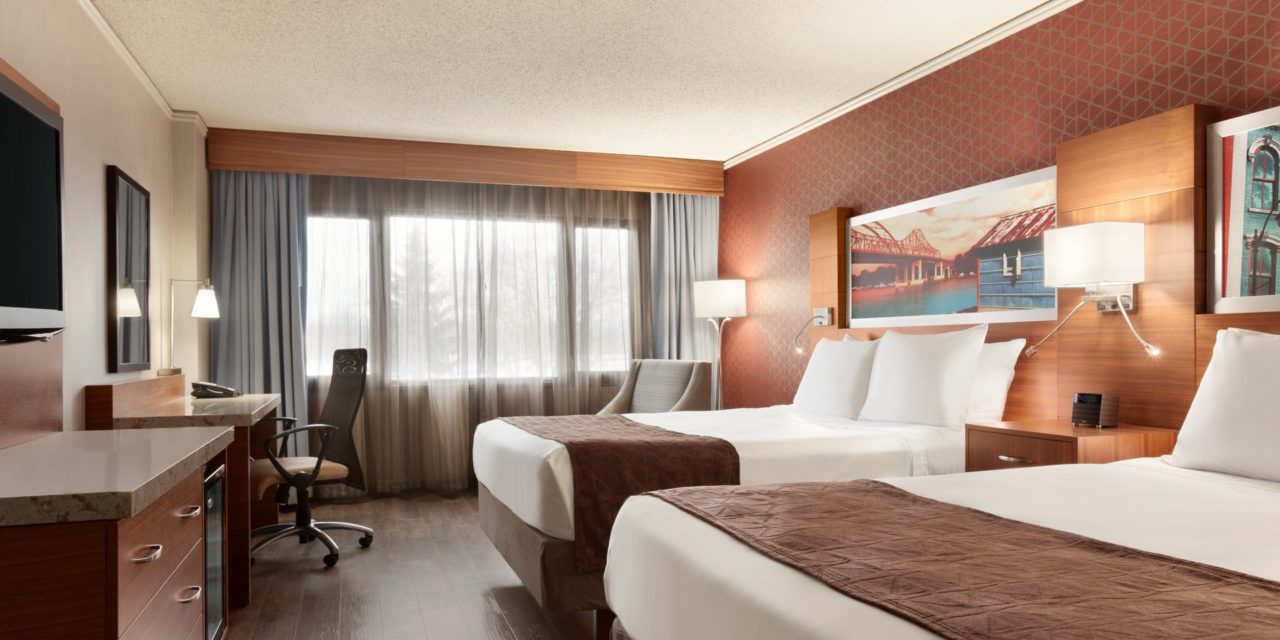 As the City of La Crosse approves what will be included in the La Crosse Center remodel for $42 million, they are also looking at how to finance the project. Mayor Tim Kabat wants to offset bonding up to $1.3 million through the increase of the room tax – i.e. a special tax added to hotel room stays. Mayor Kabat originally proposed 12%, has come down to 11%, but publicly said he wants a 10% room tax. His goal is to not increase property taxes.

The Chamber agrees that increasing property taxes is not desirable, but a room tax is a small financing option with high risks. We support the findings of Explore La Crosse. 9% is the highest we should go.

Businesses would approach the decision to remodel in order to stay competitive by going straight to increasing prices by 50% to pay for it. An owner would first evaluate competition, explore all funding options, and gently seeing what the market will bear.

Our convention experts/partner, Explore La Crosse know the competition. Their research is highlighted in a sidebar.  They say a room tax higher than 9% moves La Crosse to the highest room tax in Wisconsin and will negatively impact our ability to attract the conventions that the Center’s remodel hopes to keep and increase. We cannot doom the La Crosse Center before it opens its doors. Its success impacts all of us. Its failure will put the burden on taxpayers — i.e. what Mayor Kabat is trying to avoid. There are other solutions.

The Mayor is proposing taking the highest risk. The Chamber disagrees and supports Explore La Crosse.

How You Can Help

COME SPEAK
April 2 at 6:00 p.m.
La Crosse City Council Chambers
to the Judicial & Administrative Committee
AND EMAIL BY APRIL 1:
council@cityoflacrosse.org
and copy us in
info@lacrossechamber.com .

It helps us know
what the business community is saying.

without the City gaining the reputation of being the highest priced rooms in the state and having to repair damage done by raising it too high and too quickly.

Why Non-Tourism Businesses Should Care

A fact sheet provided by the mayor explained:

When we all have an expense that comes up, we look at options similar to the below to pay for it. As with the city, a combination of solutions is often needed:

All of these options have not been fully explored or discussed.

The room tax at its current 8% raises $2.6 million. Those funds currently go towards:

REMEMBER:
If fewer hotel rooms are sold, $0 taxes are collected. Pricing is a fine balance.

How You Can Help

The History:
The Room Tax Created the Convention & Visitors Bureau in 1975

The room tax was created in 1967 by Gov. Warren P. Knowles to fund emergency state aid for local schools. Its creation without clear specifications of what the tax could be used for had the Wisconsin Innkeepers Association opposed the tax. 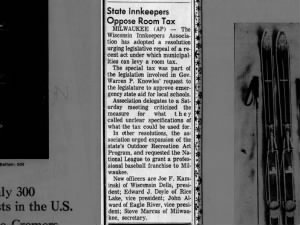 This prompted an editorial by the La Crosse Tribune.

By April of 1971, the Wisconsin Innkeepers Association, fueled by $500,000 in state funding for tourism, realized they could restrict the funds and add $1.5 million through the room tax. They proposed the room tax be used to build tourism facilities and promote recreational facilities, with the state keeping 25% and passing the rest to municipalities.

At the time, Madison’s room tax was up to 6% with hotels reporting loss of stays to outlying communities and no funding going to tourism efforts (read >>). 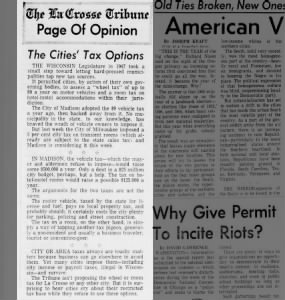 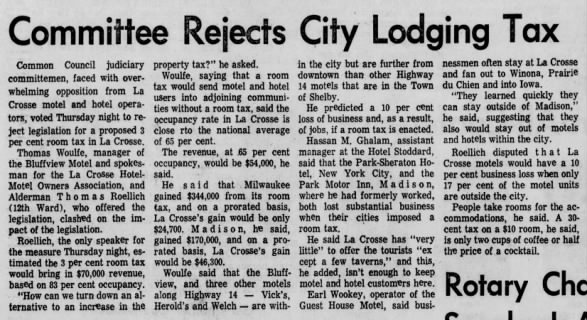 Seven months later, a committee of the council again voted down a 3% room tax.

Madison lodging reported a 14.3% loss in business after the room tax as people opted to stay outside the city.

One week later, the effort would officially be rejected by the full Council with fears that a city-only room tax would cause people to stay in surrounding communities (read >>) 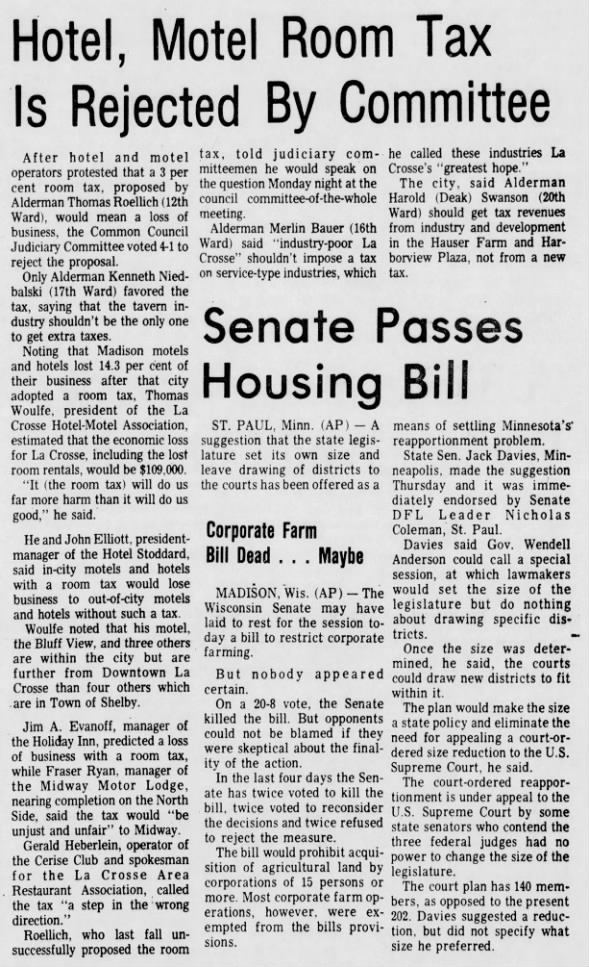 The Chamber and it’s four month old Convention & Visitors Bureau brought in a Green Bay representative to speak to the importance of the tax. This was a pivotal meeting. It changed the conversation around the tax. The Chamber at the time had been struggling to pay for its convention bureau through memberships. 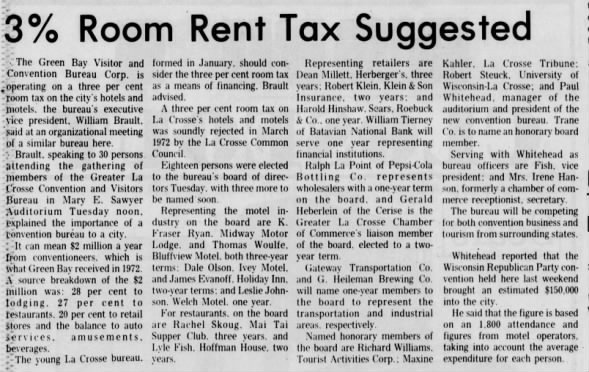 In November of 1973, the Chamber believed the room tax was the solution to its Convention & Visitors Bureau funding problem. Work began to propose the room tax. 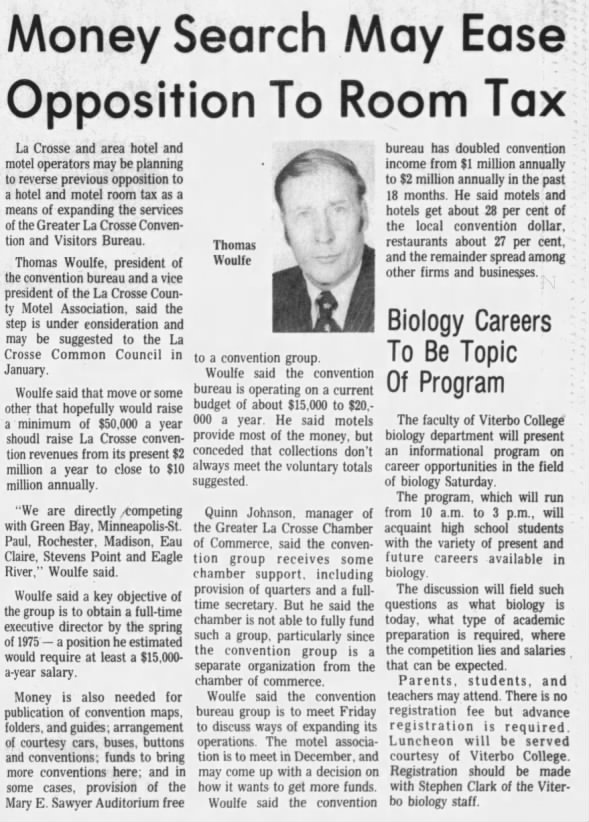 By 1975, the Convention & Visitors Bureau was proposing a room tax with motels and hotels seeming in favor of the tax. This became one of several topics for four mayoral candidates.

Several side stories included in this same article: 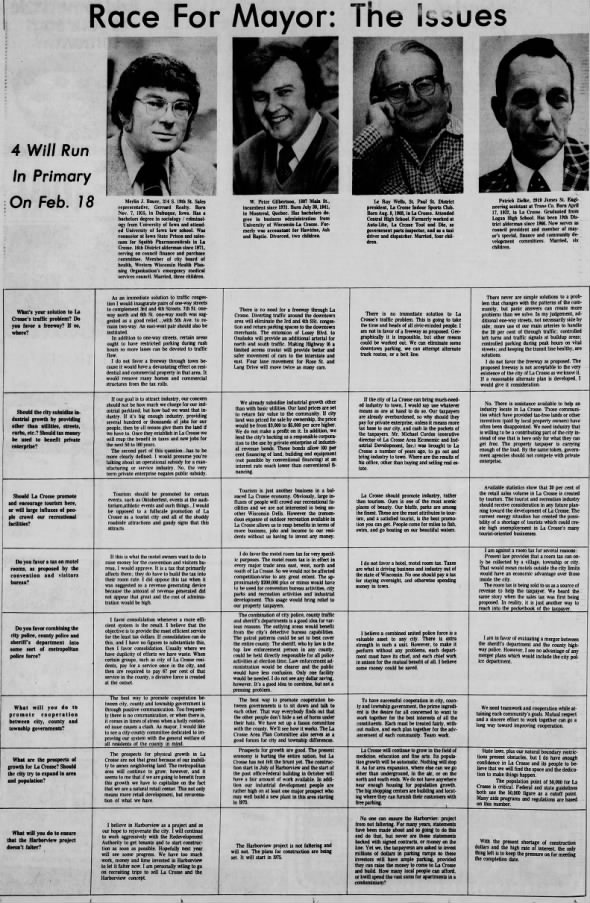 With the Chamber’s Convnetion & Visitor’s Bureau now in favor of a room tax, the City Council took up the tax in February of 1975, but deferred it due to lack of clarity on how the funds would be allocated and used.

On March 5, the Chamber determined a formula, but the vote was deferred again because the motels and hotels collectively were not in favor of the tax.

In 1975, about 80% of the hotels were rented by “salesmen” and this was considered a hardship on them.

One week later, the hotels and motels, feeling a tax was inevitable after three prior attempts. They conceded knowing it was being invested to drive business to them.

The Chamber’s Convention and Visitor Bureau would work to attract conventions to the City. Certain capital improvements to the city’s recreation and convention facilities would also be funded. The proposal would have:

Of the City’s 25 motels and hotels, 23 supported the tax, realizing the number of times it was proposed made it inevitable.

The agreement created a commission of city and industry representatives to oversee the budget/room tax funds.

The Ramada Inn in the Town of Campbell agreed to petition the City to join the room tax. 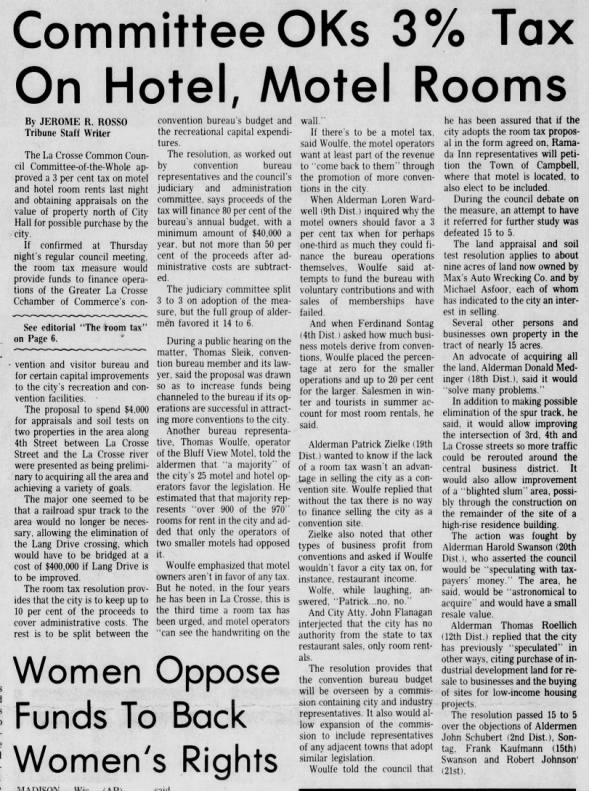 This sparked a same-day editorial by the La Crosse Tribune. 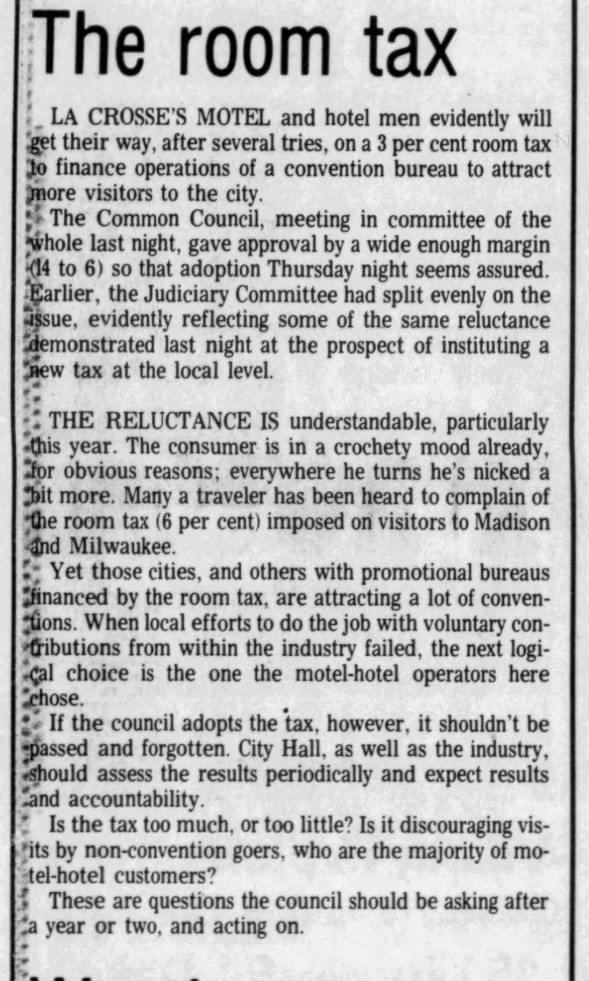 Within days, the City Council approved the 3% room tax. This was predicted to move the Convention & Visitor’s Bureau budget from $9,000 raised through membership dues to $40,000 raised from the tax.

Part of the agreement with the City was that 20% of the Convention Bureau’s budget had to be raised through membership dues. The Bureau had 51 members. In April, the Chamber ran a membership drive for this funding (read >>). Two weeks later, the La Crosse Area Motel Association voted to join the Bureau (read >>), arguably the beginning of the group’s merger with the Bureau. 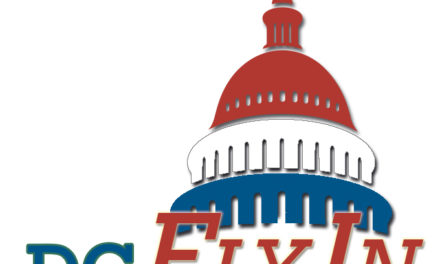 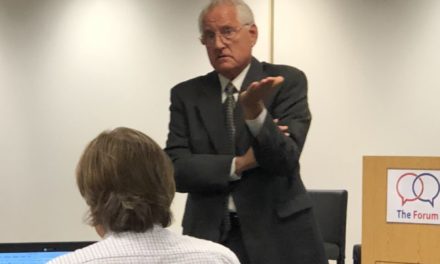